On the eve of the Giving of the Thanks I have lots to be thankful for, most of all the people in my life. I am fortunate enough to have friends and family that are supportive of my funny-book-making butt. (I believe at some point I may have to nominate Melissa for sainthood?)
On top of that I have the most wonderful and talented students ever.
And I knew that before making The Brothers Brimm.
Now, well now, frankly I’m just blown away.
Former and current students alike have been the most encouraging, engaging, helpful…If I keep going they are going to sound like the Seven Dwarfs. But I am at a loss for words.
Chances are if you know about The Brothers Brimm, my artwork, my comics or my book it’s because of one of my students. For that, thank you, just doesn’t seem like enough.
As I write this The Brothers Brimm has just passed 10,000 views on both Vimeo and Youtube. The Youtube post was a huge shot in the arm for the flick. This came about due to some of the students that worked on the production submitting it to CG Brothers. 6,748 and counting since November 11th! (This is one of the many, many reasons why I refer to the students that put together The Brothers Brimm as the Awesome 22.)

I just wrapped up a Character Design Boot Camp at UArts where we watched the film (in 3D) and created character designs based on Mythological Creatures. (I’ll be posting some of the amazing here shortly.) That brings the tally to three different lectures. After each lecture it’s the attendees that post and reblog the link to the cartoon. Again, students.

Above: The inspiration for the final polaroid from the credits of the film based on a pic of my friends. Pictured, from left to right; Necro, Syrup, Suki, Waffles, Kyle, Jeffro, Melissa and me.
Below: A sketch from one of my former students, Phil Vazquez. You can check out more of Phil’s work here. 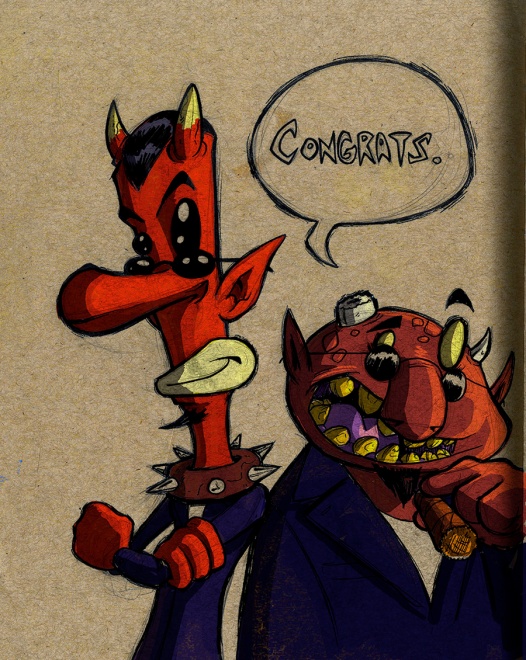 And now we are entering a realm I never ever thought possible, other artists are drawing and designing their versions of the boys. It started with Phil Vazquez a former student of mine. We chatted around the time I was just starting to work with the DAVE School on the cartoon. A few days later I had a wonderful sketch of good ol’ Waffles and Syrup. Again, students.

Just a few weeks ago Keller Grimmer, the son of one of the Philadelphia Cartoonist Society members messaged me with a request. It read:
“Hey Patches! For my 2D Digital Imaging Class we have to create a paper toy model in Illustrator. I was wondering if you would be fine if I did one of your Brother’s Brimm Characters???”

I have known this dude since he was about 8 years old. I was floored by the request and more floored by the end result. I have plans to put one of these together in the not too distant future. (I also told him he better get an ‘A’ or I’m coming to pay a visit to his instructor.) 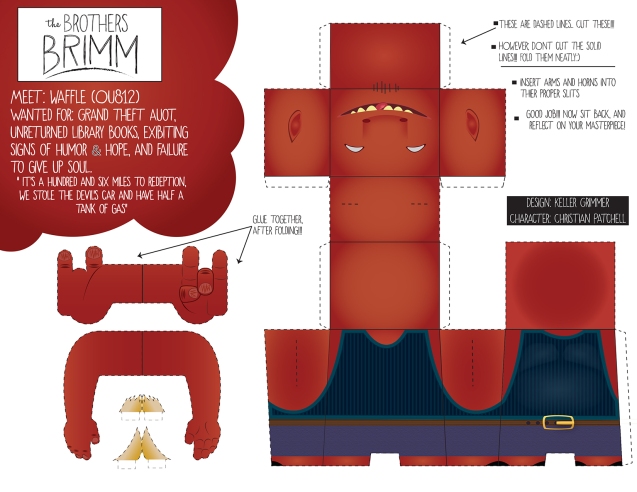 Above: Syrup paper toy design by Keller Grimmer. Click on the link to download a pdf for printing – SyrupFinal.

Lastly, Melissa has been nothing short of spectacular. It is she that helps to sift through the different film festivals looking for a good home for the boys. It is she that encourages me to make a most of this year with The Brothers Brimm. It is she that reminds me of what we have accomplished so far in just two months. And it is she that finds the time to do a weekly comic to boot.

SO just so you know when we settle in around the roast beast tomorrow I will be thinking of everyone that has helped and been an inspiration. THAT is a list that keeps growing and THAT is a reason to be thankful. I am so having the “The Time of My Life”!

Above: Doodle Town comic by Melissa. This one covers our amazing trip to Florida for the screening of The Brothers Brimm.
Below: Model of Waffles and Syrup. These were sent to me in the middle of the production. This is how I knew I was working with the right people. No one puts Syrup in the corner!

The Brothers Brimm from The DAVE School on Vimeo.

“Die wanna wanga.” Okay so when do we get the story of how Bib Fortunate went from lackey to full fledged Hutt!? I have always been fascinated by this character. Another sketch from the bedside sketchbook. Swipe ▶️ to see details and inspiration. #maythe4thbewithyou Cheers! 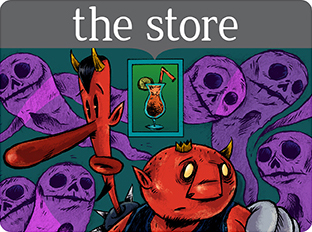