“It pays to have smart friends.”
OR “The stuff of spells.”

I wanted to follow up last week’s blog post about The Brothers Brimm with something I haven’t shared yet in any of my posts or talks. I decided to pick what has become one of my favorite characters I’ve drawn (ever) and he wasn’t really suppose to be in the mix, at least not in the beginning.

When I was approached by the DAVE School we originally talked about creating a trailer that consisted of a kind of “best of” the comic pages I had sent them. There wasn’t any Necro anywhere on the printed page. After scrapping that concept, Matt the director, mentioned how he liked the rough sketches of Necro found in the original pitch. So in the second script we not only worked him in but he became a pivotal narrative tool in the incapable hands of two real tools, Waffles and Syrup.
When I went to draw the final concepts for Necro I couldn’t help but be influenced by some of the amazing cinematic appearances made by the book of the dead. I am of course referring to both Hocus Pocus and The Evil Dead. Also, if you’re going to make a book talk, you gotta watch a little of The Page Master starring Macaulay Culkin. My friends in comics may also see a nod to Bernie Wrightson‘s Frankenstein and Swamp Thing. Mr. Wrightson is a huge influence and it was so much fun to pay homage to the man.

Above: A screen grab of Necro’s ‘meet-cute’ from The Brothers Brimm.
Below: Some of the first character designs for Necro. Medium: markers and brush pen. 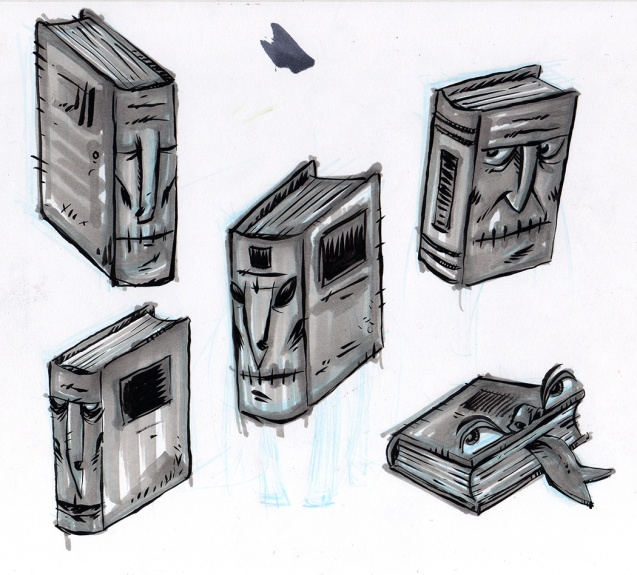 Once the basic character was established both visually (concept drawings) and in the written form (script) he still needed to be fleshed out a bit. We had to work out color palette and turn-arounds. THIS is where it pays to know smart people. Enter my good friend and frequent collaborator Concetta Barbera. Concetta and I have put together many an art exhibition and she was the amazing photographer behind the pics in my book. She is also the Digitization Specialist and Curatorial Assistant at the Library Company of Philadelphia. When I sent her sketches of Necro she quickly sent me pics of one of the oldest books in their collection. The very next day animators were scrutinizing the drawings and reference and by the last day of my three day visit I would see Necro’s mouth move! They even wrapped some of my art around pre-vis models, I was awestruck.

As for the voice that was a kind of kizmet. After throwing Necro into the mix and rounding out the cast we needed to settle on a voice direction. Myself and producer, William Vaughan, mentioned a Tracey Morgan-like approach on two separate occasions. That had a LOT to do with the fact that we had already signed John DiMaggio for the voices and he does an amazing Tracy Morgan. But we weren’t completely sure it would work so we had Mr. DiMaggio do an alternate voice in the vein of Tom Waits meets Nick Nolte, heavy on the Nick Nolte. I will be releasing and blogging about what I will fondly refer to as “The DiMaggio Tapes” in a future blog post.

Below: The final character design for Necro. He’s equal parts Hocus Pocus, Evil Dead and Page Master with a dash of Bernie Wrightson.

Even in the early stages of the animatic, we thought we had something. By the time the animatic was finalized we knew we had added one of the funniest and most memorable characters of the entire production. Note to young creatives out there, listen to the director, and trust in the collaborative experience.

I’ll wrap up by mentioning another little nugget about Necro. While in the design stages we discussed several marks or icons that might appear on the back of the book of the dead. Originally it was going to be the symbol for chaos, but it looked a little too foreboding and didn’t quite read right on screen. One of the animators working on Necro put claw marks and it fit Necro’s design wonderfully. Two reoccurring questions have been “Whose claw marks are they?” and “How did they get there?”.
Well I can tell you this, I’m pretty sure they belong to Bigg Redd and as for how they got there…
Well I’m working out that story as we speak.
Remember you can watch the film here and like us on Facebook here.
Thanks for stopping in, more on the way.

Below: The final turn-around and texturing for Necro. Credit: Erich Bomke and The DAVE School.

BRIMM Updates:
• We have officially entered The Brothers Brimm into five (5) different film festivals. We are already ‘in consideration’ for the San Francisco Independent Film Festival. So please keep your fingers (hooves and tails) crossed.
• We are currently over 3,000 plays on Vimeo and counting and at 388 likes on the Facebook page.
• I’ve spoken at two different colleges and have screened the anaglyph version (old school 3D) of the film both times. Such a blast! Nothing like seeing a room full of red and blue glasses!
• I am currently chatting with an apparel company about the potential for some Brothers Brimm inspired designs for early next year.

One thought on ““The Necronomicon, the Book of the Dead. Aaooooooh.””

The Brothers Brimm from The DAVE School on Vimeo.

“Die wanna wanga.” Okay so when do we get the story of how Bib Fortunate went from lackey to full fledged Hutt!? I have always been fascinated by this character. Another sketch from the bedside sketchbook. Swipe ▶️ to see details and inspiration. #maythe4thbewithyou Cheers!